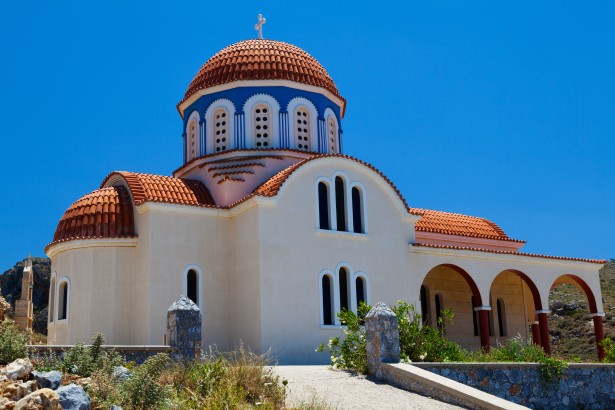 “Walking into a consecrated church is like walking into heaven.” ~ St. Gregory of Nyssa

In 313, Christianity, for the first time in its history, became a “legalized” religion. The Roman Empire under St. Constantine the Great ended its persecution of Christians. For the first time they were permitted to worship openly. Immediately following this proclamation, thousands of churches were built within the empire—from the landmark basilicas constructed by St. Helen on the holy sites in the Holy Land, to the glorious cathedrals built by St. Constantine in his new capital city, to the intricate churches carved in the cliffs of Cappadocia, to the churches in the monasteries on Sinai, in the wilderness of the Jordan, and on the remote mountains of Greece. Everywhere Christians were zealously dedicated to erecting churches. Many of these churches exist until today, constructed of stone and built to last millennia.

The zeal for building churches has remained as a primal instinct among the Orthodox. In native Orthodox lands, churches, as well as chapels and shrines, are scattered across the countryside, wedged between tall buildings in the cities, and perched on precarious mountaintops. Each place of worship is a testament to the faithful’s desire to offer the best to God—be it a great offering or small. In the Slavic lands, after the fall of Communism, hundreds of churches were built or rebuilt. Even today the Slavic people have not ceased to build awe-inspiring churches, monasteries, and chapels. Their love for God is continually manifested in the offering of a sanctified dwelling place for God.

The sanctification and completion of a church is found in its consecration. This is its sacramental “setting aside” as a space that is wholly dedicated to the worship of the Triune God. A consecration is also described as the baptism of the church. The altar is washed and clothed in a white baptismal garment called a katasarkion (“upon-the-body cloth”), which is never again removed. The walls and icons of the church are anointed with Holy Chrism, the same Chrism which is used to anoint during Chrismation. The antimension (the decorative cloth icon upon which the Holy Gifts are consecrated during the Divine Liturgy) is blessed.

Most importantly, in a consecration the church receives the relics of martyrs, which are permanently encased within the altar. These relics impart the grace of God upon the sacraments that are performed in the church and sanctify those who worship in the church. They bring the presence of those holy martyrs into the liturgical services.

As Orthodox Christians—many of us converts to the Faith—we must grow in that zeal which our brothers and sisters in Christ around the world possess: the zeal to build beautiful and God-pleasing churches. A building is only worthy as a dwelling place of the living God when we offer Him our very best. (Remember Cain, who gave to God an inferior offering, which God did not accept.)

Let the search for our permanent church home be at the forefront of our thoughts and prayers, so that we can soon have the opportunity to give God our best offering!

I encourage you to listed to an engaging talk given by Fr. Josiah Trenham on the subject of a church consecration—Sanctifying Space: The House of God.

Dear Beloved in Christ, Today is the feast of Mid-Pentecost, on which we commemorate two events ... [ END_OF_DOCUMENT_TOKEN_TO_BE_REPLACED ]