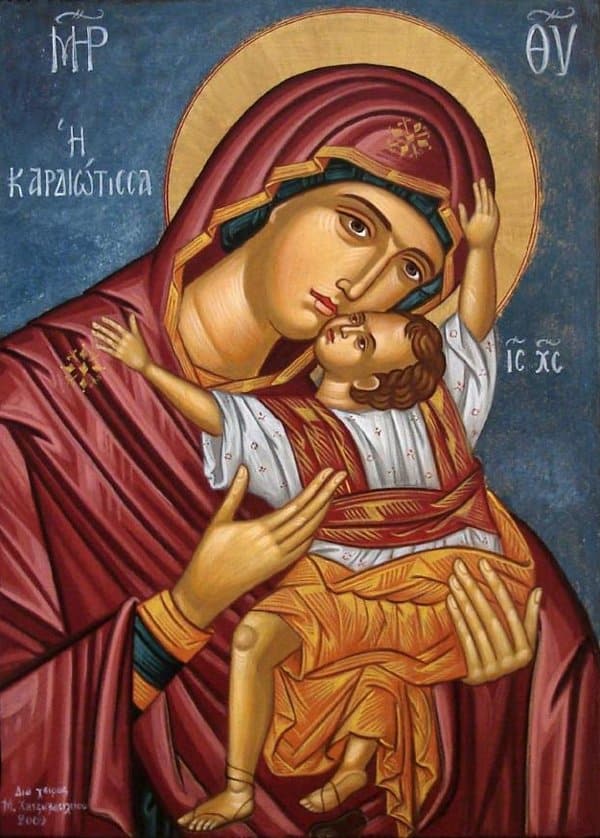 What’s in a nickname? (To paraphrase Shakespeare.) It seems that nicknames have been around as long as proper names have. In the Bible we learn that the Apostle Thomas was called “Didimos” (“The Twin”), James and John were called the “Sons of Thunder,” and Simon was called “Zealot.”

Some nicknames are so predominant that we forget the person’s real name. The chief Apostle, Peter, was actually born with the name Simon. Yet he was named “The Rock” (Petros in Greek, or Cephas in Aramaic), and his nickname became the only name we remember.

So what is in a nickname? A nickname implies familiarity, closeness. It means the person is not a stranger but rather a family member or a friend. It’s someone you care about or love, and often times using his or her formal name, like “Jonathan” instead of “Johnny,” would feel awkward or standoffish.

In Orthodoxy, our fondness and kinship toward the Mother of God is expressed in the nickname “Panagia.” While “Theotokos” is her proper title – which roughly translates as “The One Who Gave Birth to God” – she is affectionately referred to as “The All – Holy One” or Panagia. (The accent is on the I, “pan-a-GI-a,” and the G is pronounced like in good, not as in George.) When Orthodox Christians say Panagia, they are showing their fondness for her, expressing that she is their mother, not only God’s mother.

As a convert to Orthodoxy, this has been a personal revelation which took years to unfold. I came from a Lutheran background, which was not overtly anti-Mary, but just kind of ignored her importance. As such, I had no closeness to her. She was just a concept: The woman who gave birth to Jesus. As I entered Orthodoxy, the Church compelled me to pray to her through the worship services; yet my personal devotion to her – and to all of the saints – was almost non-existent.

I would hear cradle Orthodox talk about the Panagia as though she was their very own mother, who was actively working in their lives. I yearned to feel the same, and even I tried using the nickname, but it didn’t feel right, so I stuck with “Theotokos.” Eventually I realized that the only way to become close to her is to pray to her. This may sound quite obvious; but it’s a worthwhile lesson: We can only know the saints and the Panagia if we pray to them. Otherwise we will only know about them. If I want them to be members of my family, I have to talk to them. In fact they are already members of my family, the Body of Christ, but they have been estranged from me by my upbringing. I need to draw myself closer to them through prayer.

I began by praying the Paraklesis to the Theotokos, then Akathists and other prayers. As I prayed these words, I began to see how the Panagia intercedes for us in a way that only a mother can. Her little baby boy, whom she nursed, hand-fed, taught to walk and to speak, is the God Before All Ages. This great paradoxical mystery is the cause for our veneration of her, and the source of our boldness to ask for her intercession. Jesus is compelled to listen to the requests of His mother, who raised Him, nurtured Him, protected Him.

The joy of knowing the Panagia is to realize that her heart is not small. It is great enough to encompass us all. She desires to talk to her Son about your concerns. Pray to her!

This is the month of the Panagia, as we enter into a two week fast preparing us for the celebration of her falling asleep, the Dormition. We have the blessing of singing the Paraklesis service to her each night during these two weeks. Please make it a priority to participate in as many of these Paraklesis services as you can, to grow closer to this important family member in the Body of Christ.

Later this month, I will travel to the “Garden of the Panagia,” Mount Athos in Greece. I will be gone August 20-31, and will celebrate the Panagia’s Dormition a second time, since Mount Athos follows the Old Calendar. I pray that the Panagia will intercede in your lives.

Through the prayers of the Most Holy Theotokos, Lord Jesus Christ have mercy on us and save us!

Dear Beloved in Christ, Today is the feast of Mid-Pentecost, on which we commemorate two events ... [ END_OF_DOCUMENT_TOKEN_TO_BE_REPLACED ]