I have been asked many times to describe my journey to Orthodoxy, and every time I answer it seems to come out with a slightly different emphasis. I know many people who have had a “road to Damascus” moment, but I was (and am) too stubborn for that. I’m still working to understand my past and the ways, both great and small, that Christ was calling me through it all. So here is the latest version.

I was born into an interfaith household: 50% semipracticing Jewish (my father), 50% non-practicing Protestant (my mother), and 100% secular. My parents, in their naturally loving and supportive way, raised us (I have 3 siblings) in an environment of choice. They signed me up for nearly every sport and extracurricular activity and let me pick which one(s) I liked; the same went for musical instruments, etc. And, naturally, they approached religion in much the same way. Rather than choose between their two traditions, they “exposed” us to both. We celebrated Christmas and Easter, Passover and Chanukkah, but always as more or less secular gift-giving days. During all of these holidays, if religion or faith claims ever came up (I remember asking one year how the Incarnation worked— how did God come down here and also stay up there?), they would just say “it’s the spirit of the holiday that matters” and leave it at that. So, because faith was off the map and Judaism was more culturally present than Christianity in my home, I automatically identified as Jewish (or “half-Jewish”) most of my childhood years, without ever thinking too deeply about what that really meant.

By middle or high school, I was a committed atheist. That might sound sudden, or maybe not. It was an organic process that I can’t really pinpoint. By the end of high school I was diving headlong into every far-eastern religion and New Age philosophy that I could get my hands on. Buddhism appealed to me as a religion that didn’t require a belief in God, and Hinduism told me I WAS God—a flattering proposition for any teenager to hear. The works of Aldous Huxley and Timothy Leary also told me that all religions were basically the same and I was free to take what I liked and craft my own reality out of them. Throughout this time, Christianity remained for me one of the “lower” religions and a target of mockery, although I always held an inexplicable fascination with the concept of faith and wondered how Christians could believe what they did.

When the time came to pick a major in college, I chose Religious Studies. This was the beginning of my exposure to Christianity as a thoughtful religion. I was at first deeply drawn to Gnosticism, which appeared to me as a sort of “Buddhist Christianity,” but I also learned some Church history and was first exposed to the writings of the Fathers. It was around this time that, somehow, I decided that I would try to be Christian—I would try to figure out how to acquire this “faith” thing. I read St. Athanasius’ Life of St. Antony and the Desert Fathers, as well as some Protestant theologians and scholars. But when it came to picking which school of thought made sense to me (this was still all in my head, without a thought of “joining” anything), I saw only Catholicism and Protestantism, and neither one felt quite right. Then, in a class on the history of Christianity, we read a chapter on the Great Schism. The book pointed out that, yes, there was an entire Eastern half of Christendom that continues to this day but, no, it would not be covered in this book. Around this same time, I also learned that a high school friend had recently converted from Zen Buddhism to Eastern Orthodoxy. My search would continue, but now Orthodoxy was on the map. It was also around this time that Sam (now my wife) and I met and began dating.

Another year or two passed, and I began reading about Orthodoxy in earnest. When I got into the MA program at the University of Virginia, I learned that a professor of Orthodox theology had just joined the faculty. I spent the next two years taking every class on Orthodoxy that was offered, and this served as my first catechism. At the end of the first semester, our class took a field trip to a local skete to visit the monks’ icon workshop. Before the tour, we participated in an Hours service, and this first experience of Orthodox worship touched my heart: I knew I was home. The next semester I read Dostoevsky’s Crime and Punishment, and, as I finished the novel, it occurred to me that I needed to be baptized. But it was not until I finished school and felt the void of no longer having other people with whom to share and discuss Orthodoxy that I looked up the local (Ukrainian) parish and began attending services and inquirer classes.

I continued this process for about a year until Sam and I decided to move to Portland. Within a couple weeks of arriving here, I met Fr. Timothy at Starbucks (where I was working), and he invited me to St. John. I continued my process of inquiry for another year and on July 6, 2012, I was received into the Church.

Throughout this process, Sam and I had many challenging conversations, including what kind of wedding to have (we had a Jewish wedding) and how to raise our children. But throughout it all, she has been immensely supportive, even when she did not fully understand what I was going through, and God has been incredibly merciful to us as a family. I will leave it to Sam to tell her half of the story another day. 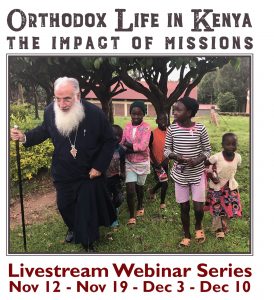 Light the Path on Dec 5th!

Join us for a FREE virtual celebration on December 5, 2:00-3:30 pm in support of the Light the Path" ministry.

Dear Beloved in Christ, Yesterday we celebrated the great feast of Transfiguration. What a joy to ... [ END_OF_DOCUMENT_TOKEN_TO_BE_REPLACED ]

Dear Beloved in Christ, Today is the feast of Mid-Pentecost, on which we commemorate two events ... [ END_OF_DOCUMENT_TOKEN_TO_BE_REPLACED ]