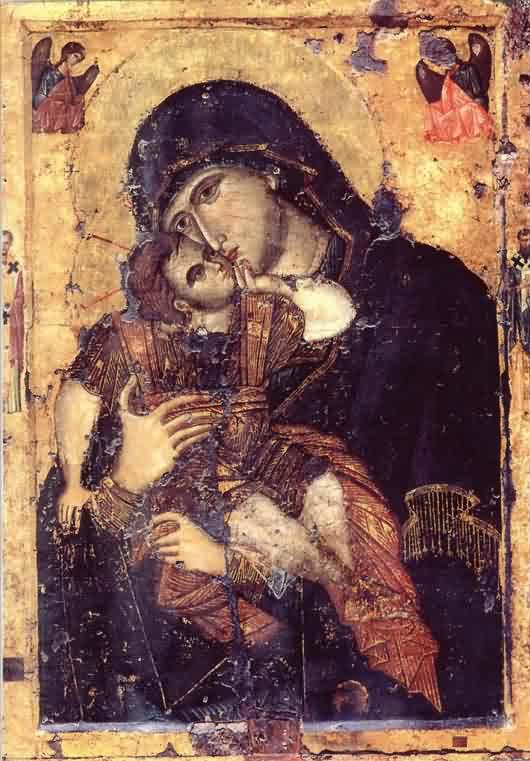 Some of you will remember Dn. Stephen Muse who came to our parish two years ago to conduct a marriage retreat for our community. As we enter the summer months, we can already set our eyes on the next great feast day of the Orthodox Church, the Dormition of the Theotokos. In light of that, I asked for Dn. Stephen’s permission to repurpose for this combined summer newsletter a beautiful article he recently wrote. Enjoy! ~Fr. Timothy Pavlatos

Did Mary Sing Lullabies to Jesus?

Jesus sang with His disciples (Mt 26:30). That much we know. Other sources suggest He danced with them as well (Acts of John). He was tender enough to weep over Jerusalem, and publicly at Lazarus’s grave. He evidenced other signs of psychological maturity characteristic of what we would call today, a securely attached child who was able to live a balanced life.

Jesus was sociable, attending family weddings, spent time with friends and attended synagogue. He regularly withdrew by Himself in silent retreat for discernment and communion with God. When Peter sought Him out asking Him to leave His desert sanctuary to return to Capernaeum to cure diseases and deal with people’s immediate problems, Jesus refused, saying He had to go on to other places and fulfill a different diakonima.

He had active and clear boundaries, allowing an embrace when it was appropriate and refusing it when it was not (John 20:17). At peace in His own skin, He was not threatened by a woman unexpectedly pouring perfume on His feet while He was reclining at supper, undoing her hair in public and wiping His feet with her tears. He could confront those who placed themselves above others in judgment and yet was humble enough to wash his disciples’ feet one by one, clothed in the vestments of a towel wrapped around Him, signs of mercy and humble service.

He dined with dignitaries and also with public pariahs. He went about speaking openly among the people yet was able to travel incognito as circumstances and His mission required (John 7:10). His disciples remember Jesus as having strength and composure under fire that enabled Him to respond to the confrontations of religious scholars and public officials who questioned Him as well as showing the tenderness and compassion needed to comfort and console others when they were most ashamed.

Throughout His tumultuous ministry He did not get His sense of self from other people’s opinions about Him, even when adulation was enough to make Him king, because kenodoxia (vainglory) had no place in Him. “He needed no one to bear witness to Him for he knew what was in man.” (John 2:25) St. Isaac the Syrian says to know oneself is greater than raising someone from the dead. Such knowing comes from the humility, clarity and simplicity born of repentance and no one is humbler than Jesus. Elder Arsenios observed “Humility is genuine only when Christ is present.” For Christ is Himself the utter humility of God’s willingness to become empty and patiently endure all things, die and go to hell for those He loves.

So how did Jesus get this way? Well, He’s God. That would seem to be enough at first glance, but not exactly. He is also fully human and His divinity and humanity are seamlessly united in his person without distinction and unconfused. In other words, His divinity is affected by His humanity in every way possible by the same temptations, developmental hurdles and life challenges that affect every human being from conception to birth to infancy, childhood to adult maturity. Hmmm…

As a human being, utterly helpless at birth, Jesus needed good parents to introduce Him to human community. What if Jesus had had an angry abusive alcoholic father or been born with fetal alcohol syndrome or as a crack baby with his brain already damaged by drugs? What if instead of telling Him stories of Israel’s history and its spiritual heroes, Joseph and Mary had abandoned Him to digital media to waste His time with hours of video games and inane titillating television shows with endless commercials designed to incite passions? What if they showered Him with all sorts of toys and gadgets but didn’t really engage him with attention and presence? Suppose His parents both worked long hours and spent little time with Him leaving Him in day-care as soon as he was weaned? And what if when they were home they were too tired and spent from the day’s work to really enjoy Him or show a vital interest in Him? What if His mother never sang lullabies to Him or tenderly brushed the hair from His eyes with her own eyes full of joy and love and wonder so that He smiled in joy all the way down until His toes curled in pleasure at her welcome and embraces?

What if Jesus had a mother who was more often critical and dismissive of Him, trying to improve Him and unable to discern His fears and anxieties and offer Him comfort? What if when He cried, she didn’t respond? Or when He was frightened, she lacked the patience or peace of soul to soothe Him and rock Him to sleep in her arms? What if she withheld the sensual warmth and connection of her maternal presence from Him out of her own anxiety, fearful that she couldn’t risk being genuinely and simply human with God’s own Child?

There is a time in every child’s development where the foundations for later theological understanding, emotional maturity and the capacity for healthy ascetical self-denial is laid down. It happens before we can even understand words. It happens, paradoxically, by way of the very sensuality, empathy and warmth of motherly love that will be willingly, ascetically eschewed later in life, on the way to the Cross.

The foundation for mature spiritual life is laid down first by the steady heartbeat of the mother in utero, the sound of her voice beginning to form the neuronal networks of the fetus within the protective warmth of the maternal womb. Later it is the lullabies of a mother’s tender care and vital interest in her child that are more essential to spiritual maturity than a thousand sermons after the opportunities and necessities of those early years have been lost.

Children nourished without the essential ingredient of maternal nurturance fail to thrive in a variety of ways. Their ascetical struggle is distorted. Failing to truly know love, they may turn from love thinking that some kind of stoic inhuman coldness is holier. The Apostle John observed, “It is not that we love God but that God first loved us”. While this love is the key ontological event in our lives, the key psychological event is a secure attachment with our mothers and fathers. A child who is preached to learns to preach. A child who is scolded learns to scold. A child who is judged, beaten, shamed, bullied or abandoned learns to judge, beat, shame, bully and abandon others. A child who is ignored and dismissed, learns to ignore and dismiss himself, spends a lifetime in search of the love she did not get.

In Jesus, we discover a mature man Who was both paternal and maternal, Who was strong and tender, sensual and ascetical and well boundaried. He reveals to us that the union of God and human being is paradoxical, neither abandoning earth for heaven, nor heaven for earth but living out the prayer “Thy will be done on earth as in heaven.” In joining the unseen, uncreated bodiless God with the fragile, helpless created yearnings of bodily hunger and the soul’s desire seamlessly in one person, Jesus reveals to us a unique path to full humanity. In our very flesh, he has dwelled and offered us life in Him that is uncreated. We shall be raised bodily to live forever, saturated with the divine uncreated Eucharistic Grace, never for a moment forgetting that we bear in our bodies, the marks of a fearful and wondrous royal priesthood.

The eternal Liturgy of offering up every aspect of our lives, “Your own of Your own in all and for all” in an eternal thanksgiving, is only possible because out of the nothingness of our helpless, fragile created lives. God has seen fit to bring to birth His only begotten Son and placed Him in the arms of a human mother who loves and cares for Him. Thank God and thank Panagia, for without the Eternal Word and the full-bodied “Yes” of the Theotokos, and her “response”-ability to noetically attend to the divine will all along the way, our salvation could not have reached fruition. It remains for each of us to prepare a way for Him in the midst of the earth of ourselves, so that he may be born in the manger of our hearts, uniting heaven and earth. Therefore, let us adore Him, the Lord Jesus Christ, Son of God, who brings light out of the darkness, bearing in His own flesh the medicine of immortality for all who sincerely receive Him.

Dear Beloved in Christ, Today is the feast of Mid-Pentecost, on which we commemorate two events ... [ END_OF_DOCUMENT_TOKEN_TO_BE_REPLACED ]