Like all immigrant stories, the story of how Orthodoxy came to America is an interesting one, influenced by historical and political events and the cultural heritage of those who brought their Faith to America. Understanding how the Orthodox Church was established in this country helps us to understand the varied expressions of Orthodoxy that we encounter here.

In the late 18th century, Orthodox Christian missionaries came from Russia to Alaska to share the Faith with the native people there. Among these missionaries are our first American saints: St. Herman and St. Innocent. While many of the native people accepted the Faith and there is still a strong Orthodox presence in Alaska today, the efforts of the Russian Church were hindered by the Russian Revolution of 1917.

Meanwhile, immigrants were flooding into America on the East Coast and many of them were from traditionally Orthodox countries such as Greece, Romania, Serbia and Palestine. They brought their Faith and their clergy with them and began establishing churches to serve their communities. This is why you will find Greeks, Russians, Serbians, Romanians and Arabs with their respective Orthodox churches in America. Many people are surprised to find out that despite their separate buildings, these groups ascribe to the same Faith–they are ‘in communion.’ Churches that are ‘in communion’ recognize the validity of each other’s sacraments, their clergy can serve together and their people can participate in sacraments at each other’s churches. By God’s grace, the majority of Orthodox Christian jurisdictions are in communion with one another.

To say that one is Russian Orthodox, Greek Orthodox, Serbian Orthodox, etc.,  gives an indication of the dominant cultural influence of ones expression of Orthodoxy or of ones jurisdiction. It does not mean that a parish is made up exclusively of Russians, Greeks, or Serbs. It may mean that parts of the service are done in that  language, that the music or vestments are of a specific style or that certain cultural traditions are in practice there. The three largest jurisdictions in America are the Greek Orthodox Archdiocese (GOA), the Orthodox Church of America (OCA) and the Antiochian Orthodox Archdiocese (ANT), which are all in communion with one another. In less populated parts of the country, these jurisdictions will generally work together to plant one church in that area that serves all Orthodox Christians there, whereas in larger cities, there may be multiple churches of the same jurisdiction to serve the needs of a large and diverse Orthodox population.

Converts and the Use of English

While immigrants and their children still make up the majority of the Orthodox Christians in America, many Americans have converted to the Orthodox Faith. For this reason, and also because second and third generation Americans speak and understand English well, most Orthodox churches do some, if not most, of their services in English. At St. John the Baptist, approximately 60% of our parishioners are converts to the Orthodox Faith. Our services are in English, with select hymns repeated in Greek.

My wife Tammy says that through our life together, I have never surprised her until the day she ... [ END_OF_DOCUMENT_TOKEN_TO_BE_REPLACED ] 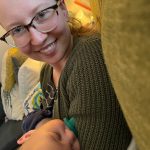 As a child I grew up in a Christian household and attended many different parishes from Methodist to ... [ END_OF_DOCUMENT_TOKEN_TO_BE_REPLACED ]