The Holy Sacrament of Marriage bears witness that through His action, God is active in our lives. It is He who joins a man and a woman in a relationship of mutual love. Through this Sacrament, a man and a woman are publicly joined as husband and wife. They enter into a new relationship with each other, with God, and with the Church. Since Marriage is not viewed as a legal contract, there are no vows in the Sacrament.

According to Orthodox teachings, Marriage is not simply a social institution, but an eternal vocation of the Kingdom itself. A husband and a wife are called by the Holy Spirit not only to live together but also to share their Christian life together so that each, with the aid of the other, may grow closer to God and become the persons they are meant to be.

In the Orthodox Marriage Service, after the couple has been betrothed and exchanged rings, they are crowned with “crowns of glory and honor” signifying the establishment of a new family under God. Near the conclusion of the Service, the husband and wife drink from a common cup which is reminiscent of the wedding of Cana and which symbolized the sharing of the burdens and joys of their new life together.

Guidelines for Getting Married 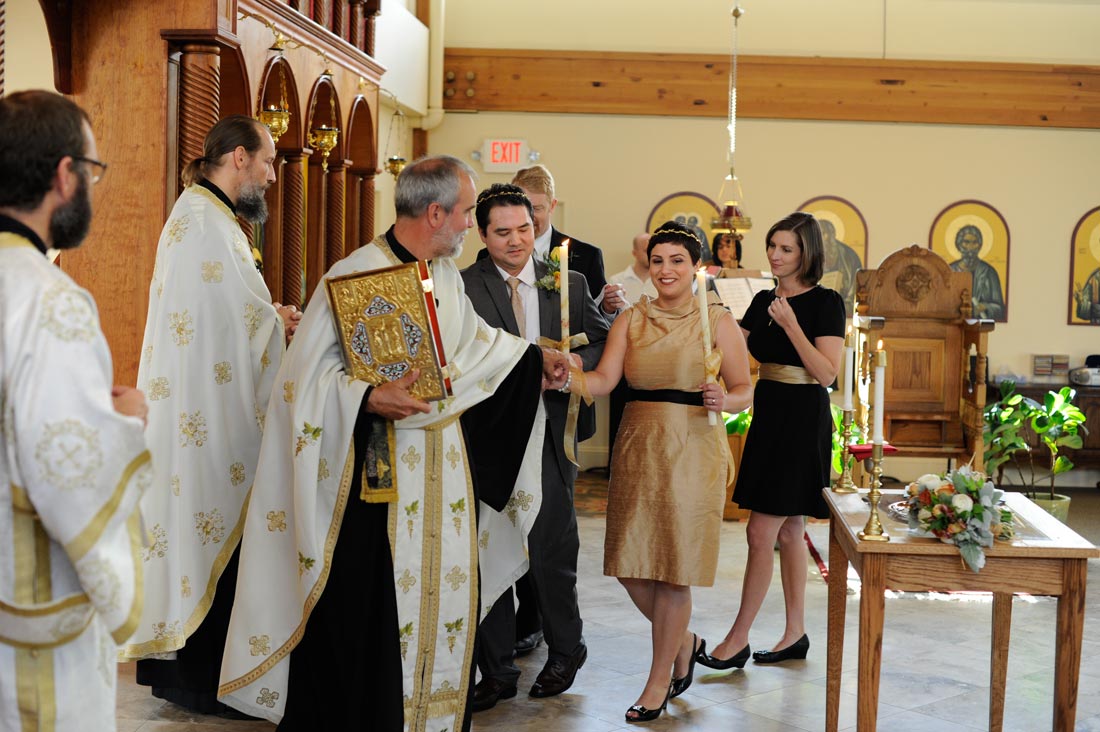 The Sacrament of Marriage is truly a “great mystery,” the mystery of the meeting of human love and divine love, the very sign and image of God’s presence with humanity. In the Old Testament, Israel was referred to as God’s “spouse,” while in the New Testament, the Church is referred to as the “bride” of Christ. These images attempt to convey in human categories what the Church Fathers refer to as the “frenzied love” of God for His people.

“A great mystery is being celebrated. How is it a mystery? They come together, and the two are made one. They have not become the image of anything earthly, but of God Himself. They come in order to be made one body; behold the mystery of love!” (St. John Chrysostom, Homily 12 on Colossians).

Marriage is much more than a merely private transaction between two individuals; it is an event in which Jesus Christ Himself participates through the presence of the sacramental minister, the priest, and that of the praying community, the church. In view of this “ecclesial” dimension of marriage, therefore, a wedding must be performed within the context of the Orthodox Church in order for the Church to recognize and affirm the validity and authenticity of the marriage.

While we include a few important notes below, there is much more involved in preparing for a wedding in the Orthodox Church, including a series of premarital counseling meetings. Please contact the Church Office for further details.

Membership – One or both members of the engaged couple must be a member in good standing of the Orthodox Church; he/she must be a pledging member and must be up to date on his/her pledged financial commitment. If one of the spouses has been previously married and divorced, he/she must present a copy of the civil divorce decree. Furthermore, if a previous marriage took place in the Orthodox Church, the divorced spouse must also have received an ecclesiastical divorce. Please be advised, this process can take a few months.

Membership for Koumbaroi (Sponsors) – The koumbaros or koumbara is the one who stands as witness on behalf of the Orthodox Church during the ceremony. Hence, it is necessary that this person be an Orthodox Christian. The koumbaroi must also be members in good standing of the Orthodox Church. If he/she belongs to another Orthodox parish, the priest must receive a letter verifying that they are members in good standing from their parish priest.

Days When Marriage May Not Be Performed

The Orthodox Christian Faith blesses interfaith marriages with the following conditions and guidelines:

Please contact the parish office for the “marriage preparation” document, which includes checklists for pre-wedding day and wedding day preparations, information about civil and ecclesiastical marriage licenses, a list of contacts and approved vendors, and more.

Stephana, candles and wine are all available at Logos Bookstore.

It is a great joy to introduce to you Ioan Gheorghiu, who will, by God’s grace, become our Director ... [ END_OF_DOCUMENT_TOKEN_TO_BE_REPLACED ]

We have begun the spiritual journey to Bethlehem, to the cave where our Lord Jesus Christ was born. ... [ END_OF_DOCUMENT_TOKEN_TO_BE_REPLACED ]

What will the community of St. John look like in 25 years? It’s hard to imagine—just as it would ... [ END_OF_DOCUMENT_TOKEN_TO_BE_REPLACED ]