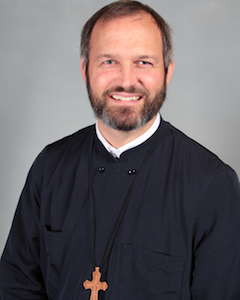 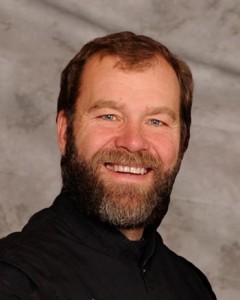 Deacon Innocent was born and raised in Southern California with his younger sister and brother. He began attending various Protestant churches when he was young, mostly through the influence and help of neighbors and friends.

He moved to Cottage Grove, Oregon for high school. After attending church with friends for a while, at the age of sixteen, he made his own decision to live for Jesus Christ. Deacon Innocent attended college at Lewis and Clark in Portland, Oregon, where he earned his degree in Chemistry. He then attended graduate school at both Lewis and Clark and Portland State University, where he received his teacher’s license and began teaching high school science. While in college, he met his future wife Sandy Duchow. They were married in 1987 in a small chapel in Lake Oswego, Oregon. Deacon Innocent remains a full-time high school science teacher, while Sandy is a neonatal intensive care nurse.

Both Deacon Innocent and Sandy attended various Protestant churches for the next decade, but never felt satisfied with their spiritual experience or the spiritual foundations of any of the churches they attended. With their son, Teddy (born in 1995), they began to look into the Orthodox Church. They were all received in the Orthodox Church in 1999. They had their second son, Samuel later that same year. Deacon Innocent was ordained to the Holy Diaconate on the Third Sunday of Lent, the Sunday of the Veneration of the Holy Cross, in 2004.

In addition to his duties as a deacon, Deacon Innocent has been active at St. John in both Youth Ministry and in the area of Missions and Evangelism.

* Proistamenos is a Greek term meaning “the one who presides”. In this context it means “head Priest (Pastor)”. “Presvytera” (Pres–vee–té–ra) is an honorary title that means “wife of a Priest”. It is derived from the Greek word for “Priest”, i.e., “Presvyteros”. “Diakonissa” (Thee—a—kó—nees—sa) is also an honorary title meaning “wife of a Deacon”.

It is a great joy to introduce to you Ioan Gheorghiu, who will, by God’s grace, become our Director ... [ END_OF_DOCUMENT_TOKEN_TO_BE_REPLACED ]

We have begun the spiritual journey to Bethlehem, to the cave where our Lord Jesus Christ was born. ... [ END_OF_DOCUMENT_TOKEN_TO_BE_REPLACED ]

What will the community of St. John look like in 25 years? It’s hard to imagine—just as it would ... [ END_OF_DOCUMENT_TOKEN_TO_BE_REPLACED ]