My Orthodox adventure started when my Uncle Billy (Steven) talked with me about church at a family BBQ more than a decade ago. My wife Crystal and I weren’t attending church at the time. I was 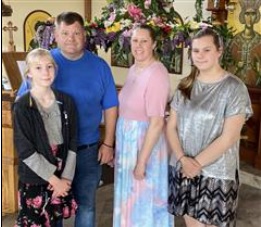 lost about what church to attend. He suggested we come visit the Greek Orthodox Church, of course my first response was, “Do we have to get togas?” I talked to Crystal about it. We went to a few more family events and talked more about Orthodoxy. Then we went to Vespers for our first service.

At Vespers and I was amazed at all the sights, sounds and smells. The beautiful architecture of the church and the ambience. I could feel God’s presence. I’ve been to many different church denominations over the years and never felt it before.

Growing up, I’d known about Orthodoxy. Mom used to talk about the Russian Orthodox who came to Alaska. So I knew that they were a Christian faith. We attended a Bible church that did Bible drives for the Christians in Russia. We would gather up Bibles to send to the Russian Orthodox to help them out because there were persecutions and things that were going on in Russia at that time. So, I knew of the Russian Orthodox. I just didn’t equate that it was same Church that I was reading in the Bible.

Growing up we always read the Bible every morning before school; we would each take turns reading a passage. I always questioned what I had read in the Bible, because it was very confusing to me. Paul was my mom’s favorite person in the Bible. She studied a lot of Paul’s writings as a Protestant. Whenever Paul was talking about the Church, I knew he wasn’t referring to the church I came to on Sunday. I knew that there was something that wasn’t right, but that the Bible is true. No one had answers for me.

Not until my first Liturgy at St John did it click. I was deeply inspired by the deacon, who was a part of the church service, like the deacon that I had read about in the Bible. I loved how you could see the Old Testament and New Testament themes within the Liturgy which tied it all together. I thought, “This is what Church is supposed to be.” When I heard the Nicene Creed, I was thinking this is exactly what I was taught to believe, but I had never heard it before. Clearly this communion was truth, not just grape juice. And I desired the true Blood and Body.

In 2010 when Kira was born, I wanted her to have a Greek name. Unfortunately Kira, as a baby was not a traveler. It was a 45-minute drive to St. John, and she just was not having it. So we attended a church in Vernonia for several years. I thought I could be a light from what I saw in the Orthodox Church, but each Sunday their path was less respectful to God. I don’t know where they were headed, but it was not a path I wanted to walk. In the meantime, my business had tanked, and I went deep into prayer. I felt this huge pull towards Orthodoxy. I started listening to Ancient Faith Radio and absorbed as much as I could. Then on Pentecost in 2017, we decided to go back to St. John. It was the same Sunday that Fr. Mathew came to our Parish, so it was a really special. Coming back home to St John was so sweet, I felt like the prodigal son returning everybody was so gracious, with open arms and taking me in as a fellow brother. I really needed that. It took my wife a little more time to come back.

In 2019, my mom was baptized just prior to her death, before we were. I had been bringing Mom and Dad to Church during the weekday services due to her health. When Mom realized she wasn’t going to be with us much longer, she decided she wanted to be buried Orthodox. She was able to do her confession and become Orthodox a week before she passed. This helped Crystal and I become Orthodox in 2020. My dad was talking with Fr. Matthew quite a bit, and then this past July he became terminally ill and was baptized in the hospital. I’m so happy my parents were baptized.

That’s basically my journey to Orthodoxy. As I look back over my life I see where God was steering me this way. I just didn’t understand what it was I was looking for until I found it. But once I found it, I knew this is what I was searching for. I really want to thank everyone who has helped me in my journey.

It is a great joy to introduce to you Ioan Gheorghiu, who will, by God’s grace, become our Director ... [ END_OF_DOCUMENT_TOKEN_TO_BE_REPLACED ]

We have begun the spiritual journey to Bethlehem, to the cave where our Lord Jesus Christ was born. ... [ END_OF_DOCUMENT_TOKEN_TO_BE_REPLACED ]

What will the community of St. John look like in 25 years? It’s hard to imagine—just as it would ... [ END_OF_DOCUMENT_TOKEN_TO_BE_REPLACED ]