My wife Tammy says that through our life together, I have never surprised her until the day she (gently and with trepidation) broke the news to me: She and my son Taran 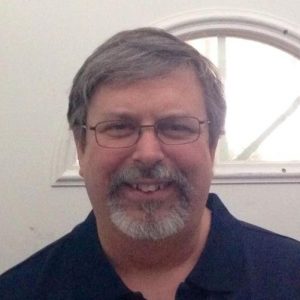 had determined that the Orthodox Church had the best, deepest and truest theology. They had found a local church that seemed—from its website!—welcoming, and they were going to approach the priest (Fr. Theodore) to learn more. I shocked her by offering no argument, and telling her I wanted to go, too! She was amazed! So let me tell you why I so readily agreed…

My journey began in middle school. My 7th grade history teacher ran an after-school Bible club, where I learned about history in a fuller context. Through her mentorship, and that of my baseball coach, I started to attend a Protestant church. As I read more of the Bible, I found myself frustrated with the fragmentation of Protestant Christianity. I yearned for the worship and uniformity of the Apostles and the Early Church. As I grew into an adult, I would attend services. I felt that no church had the full Truth—organized religion had evolved into completely man-made constructs far removed from the authenticity of the Early Church.

Upon getting married, church became less important. My belief never wavered, but active worship was just not as important to me, with the distractions of a new married life. That changed when Tammy and I had our children. We wanted to give them a foundation in Christianity, so we started attending a Free Methodist church for many years, and when the (relatively traditional) pastor retired, we started attending a “non-denominational” church.

As this church grew, Tammy and I became less and less satisfied with the sermons and worship—they had no depth. I was particularly unhappy with communion, which was of grape juice and compressed bread. I always felt in my heart that this was not given the importance and sacredness that it should have received. As the services became dominated by shallow, contemporary songs, it felt like we were attending a weekly concert with a short message. All this left me starving for a deeper theology and relationship with God and despairing that I would never find it. The original, authentic worship of the early believers was lost.

Around this time, Tammy and Taran were determined to do something about it. They started to research alternatives. They ultimately found that Orthodox theology seemed more consistently correct and authentic. It traced its roots to the original Church. Its theology was much more philosophically rigorous and consistent. Silently eavesdropping on their conversations, I found my interest piqued that Orthodoxy offered by far the most authentic worship, with the practices and organization almost unchanged since the beginning! That hit home with me and that was the reason I so readily agreed to investigate with them, along with the fact that I completely trust their scholarship and conclusions.

Still, I knew I would have to overcome some long-held standard prejudices against Catholicism. The strength of the authenticity argument, however, had already forced me to confront these and tell myself that if the Early Church did these things, then they were OK and I would have to change how I thought about them. Also, I took to heart something Tammy says, that people should not look for a church that is “comfortable”, or a “good fit” for them or what they believe. Rather, people should look for a church that is the Truth, and instead change their beliefs and “fit” themselves to it.

Attending my first Liturgy was eye-opening. What struck me immediately was communion. It is the focus of the whole service! I loved how the Liturgy is structured like a work of great literature – its story starts simply, builds to a climax (communion), then is followed by a denouement (closing and thanksgiving prayers). Maybe, instead, it is literature that owes its good structure to the Liturgy!

My first few times attending, I read through the Liturgy book carefully looking for something objectionable, some piece of deal-breaking theology, and I never found it. There were questions, and plenty that I didn’t understand. However through prayer, attending Theology 101, watching the Journey to Fullness videos by Fr. Barnabas Powell, my questions were answered. And the more I learned, the more I knew it was right! This was what I had been searching for my whole life!

The irony is hilarious: that I hated and fled church services because they contained too much music, only to fall in love with a Liturgy that is entirely music!

It is a great joy to introduce to you Ioan Gheorghiu, who will, by God’s grace, become our Director ... [ END_OF_DOCUMENT_TOKEN_TO_BE_REPLACED ]

We have begun the spiritual journey to Bethlehem, to the cave where our Lord Jesus Christ was born. ... [ END_OF_DOCUMENT_TOKEN_TO_BE_REPLACED ]

What will the community of St. John look like in 25 years? It’s hard to imagine—just as it would ... [ END_OF_DOCUMENT_TOKEN_TO_BE_REPLACED ]