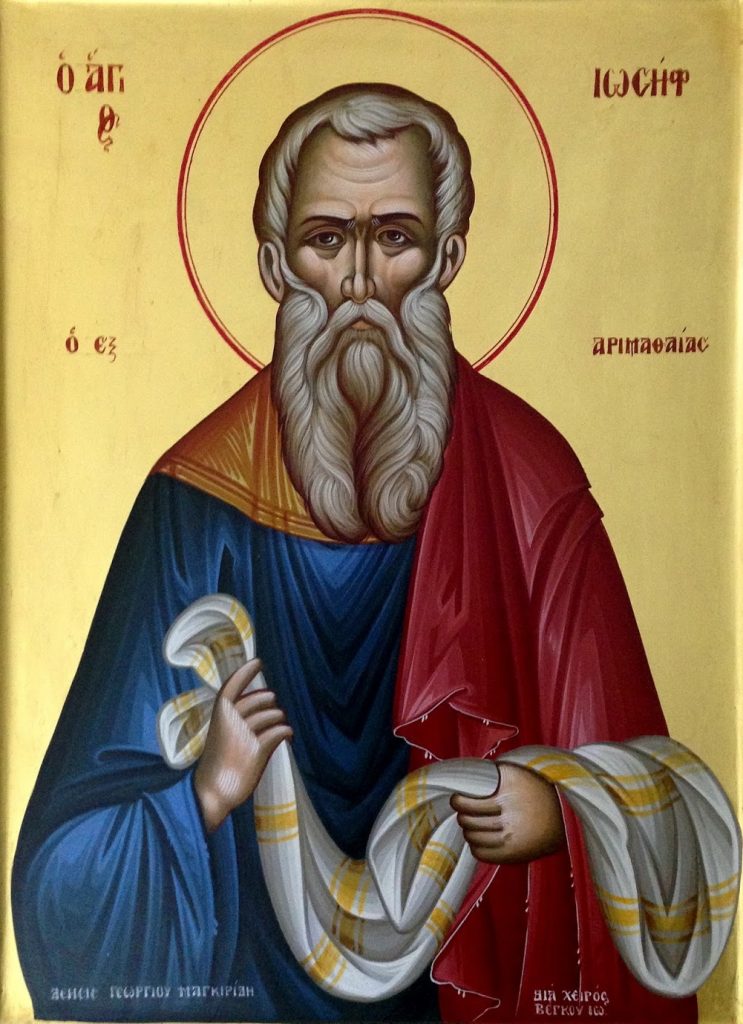 Tomorrow we commemorate—along with the Holy Myrrh-Bearers—Joseph of Arimathea and Nicodemus. These two faithful disciples of Christ took upon themselves the astounding task of burying God. Joseph boldly stood before Pontius Pilate, requesting the Body of Jesus. He and Nicodemus carried our Lord’s Body from Golgotha to the tomb and anointed it for burial. They were courageous, because their actions were a death sentence: They became the target of the Jewish leaders.

St. Epiphanios, Bishop of Cyprus, a 4th Century hierarch of the Church, wrote a homily for Holy Saturday, in which he describes in detail the profound reality of God becoming man and dying. In this homily he talks about Joseph of Arimathea. Below is an excerpt from his homily. You can also read the homily in its entirety.

EXCERPT FROM THE HOMILY OF HOLY SATURDAY
ST. EPHIPHANIOS, BISHOP OF CYPRUS

“When it was evening,” the Gospel says, “there came a rich man from Arimathea, named Joseph, who also was a disciple of Jesus. He went to Pilate and asked for the body of Jesus.”

Who ever saw, who ever heard such a thing? … A mortal went in before a mortal, asking to receive God; clay stands before clay so as to receive the Fashioner of all! Grass asks to receive from grass the Heavenly Fire … A man grants to a man the Creator of men; a lawless man undertakes to surrender the Definition of the Law to lawless men; a judge deprived of judgment permits the burial of the Judge of judges Who has been judged to death.

Now when Joseph of Arimathea went to Pontius Pilate he [offered] a pitiful plea, lowly in every way:

“O judge, I have come to make of you a small request of Him Who was condemned by you, Jesus of Nazareth, Jesus the poor, Jesus the homeless, Jesus the crucified, the bound, the shelterless, the Stranger, Who in a strange land is unknown, Jesus the contemptible, Who before all was suspended [on the Cross].

“For a dead man I interceded, Who was condemned by them whom He freed from slavery, Who by them was given vinegar to drink, Who by them that He healed was wounded, Who by His own disciples was forsaken, Who of His own Mother was bereaved. For a dead man, O ruler, I beseech you, the homeless One Who was suspended on the Cross, for He has no father near Him upon the earth, no friend, no disciple, no kindred, no burier. No, He is alone, the Only-begotten of the One God in the world, and no one else except Him.”

When Joseph spoke these things to Pilate in this way, Pilate commanded that the all-holy body of Jesus be given him. And he went to the place called Golgotha and took God in the flesh down from the Cross and laid Him on the earth, naked God in the flesh, He Who was not merely a man.

He is beheld lying low, Who drew all men on high. He is without breath for a brief time, Who is the Life and Breath of all. He lies prostrate Who is the resurrection of all. And God is slain in the flesh Who raised up the dead. The thunder of God the Word is now silent for an instant, and He is borne in the arms of men, He Who holds the earth in His hand.

You can read the homily in its entirety here.

We have begun the spiritual journey to Bethlehem, to the cave where our Lord Jesus Christ was born. ... [ END_OF_DOCUMENT_TOKEN_TO_BE_REPLACED ]

What will the community of St. John look like in 25 years? It’s hard to imagine—just as it would ... [ END_OF_DOCUMENT_TOKEN_TO_BE_REPLACED ]

My wife Tammy says that through our life together, I have never surprised her until the day she ... [ END_OF_DOCUMENT_TOKEN_TO_BE_REPLACED ]