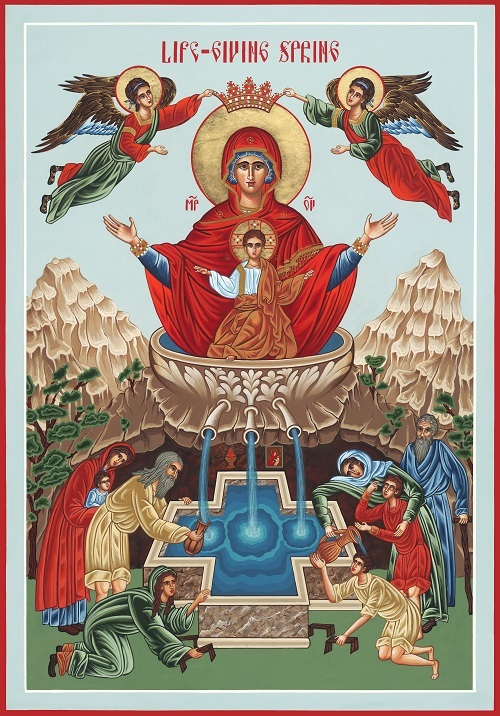 Each year on the Friday after Pascha (“Bright Friday”), the Church celebrates the Feast of the Theotokos, the Life-Giving Spring. This is a rather unique feast because it commemorates an event (a miraculous healing), a location (a spring and a church in Constantinople), and a saint (the Mother of God) all at once. It is also the feast day of the monastery of the same name in Dunlap, California.

The story of the Life-Giving Spring begins many centuries ago; yet it continues to this day. In the 5th Century a man named Leo was walking near a grove of trees, just outside Constantinople. He came upon a blind man who was thirsty but could find no water. Having compassion on him, Leo searched for water. Then a voice spoke to him, telling him that there was water nearby. He searched but could find nothing. The voice spoke again, calling him “Emperor” and directing him to a muddy spring in the midst of the grove of trees. He was directed to anoint the blind man’s eyes with the water, by which he would receive his sight. Leo knew it was the Mother of God who had spoken to him and guided him to this miraculous healing spring.

Many years later, just as the Theotokos had foretold, Leo became the emperor. He had a church built upon the site of the spring, dedicated to the Theotokos, so that faithful pilgrims could visit the spring and be healed. (St. Leo is commemorated on January 20.) Numerous miracles are attributed to the water from this spring. The title “Life-Giving Spring” was given to the Mother of God on account of these miracles. 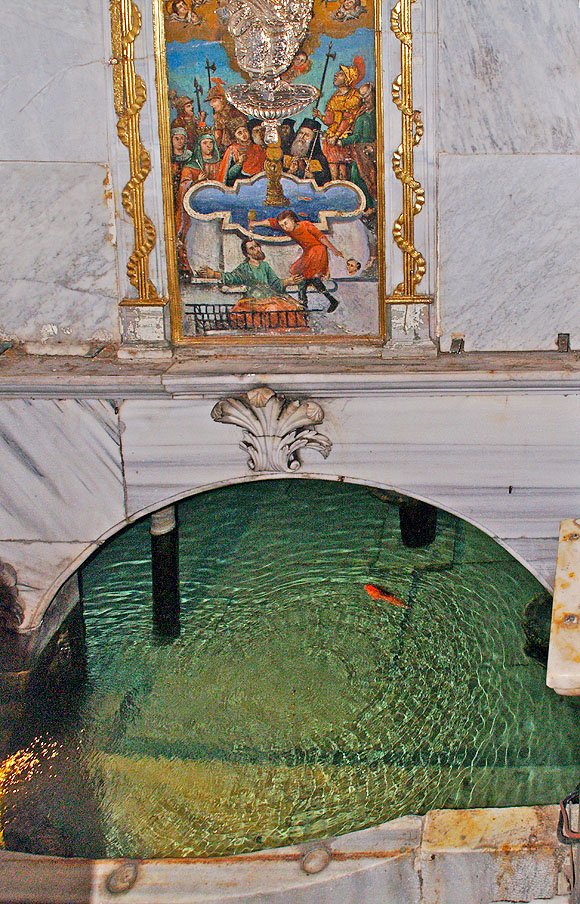 The church built over the spring, known as the Church of the Theotokos of Blachernae, became the most important church in Constantinople, after Hagia Sophia. At one time more than 70 clergy served in the church. It stood for 1,000 years, until the fall of Constantinople in 1452. Soon after, the Ottoman Turks tore the church to the ground, using the stones to build a mosque. A tiny chapel was left as a remnant of the magnificent church, with a single window offering dim light for the 25 steps which led down to the pool of water. For nearly 400 years this humble chapel was all that remained, until Greek Independence in 1821, when even the little chapel was destroyed.

In 1833 the Orthodox community in Constantinople convinced the sultan to permit rebuilding of the Church of the Theotokos. A glorious new church was erected, which stood until 1955, when Muslim Turks again desecrated and destroyed the church. Since then it has been restored, and it offers a source of healing to the faithful to this day. (See the photo to the right of the spring as it exists today.)

The title “Life-Giving Spring” has still greater significance than a mere pool of water. As we know, the source of all healing is Christ. Through His holy Mother, He grants healing of spiritual and physical ailments. Yet more importantly, the Theotokos is the Life-Giving Spring because, through her own flesh, the Savior of the world took human form, humbling Himself even to the point of death on the Cross. It is this eternal healing which we should most celebrate—God become man, so that we may join God in eternal life!

Through the prayers of the most holy Theotokos, Savior save us!

We have begun the spiritual journey to Bethlehem, to the cave where our Lord Jesus Christ was born. ... [ END_OF_DOCUMENT_TOKEN_TO_BE_REPLACED ]

What will the community of St. John look like in 25 years? It’s hard to imagine—just as it would ... [ END_OF_DOCUMENT_TOKEN_TO_BE_REPLACED ]

My wife Tammy says that through our life together, I have never surprised her until the day she ... [ END_OF_DOCUMENT_TOKEN_TO_BE_REPLACED ]