God is at work among us. He guides us through our consciences. He instructs us through the teachings of the Church and the counsel of our spiritual fathers. He even works through people who are far from Him, who refuse to recognize Him. His efforts toward our salvation are numerous, multifaceted, and constant.

The most concrete way that God sends His grace, love, and blessings into the world is through those who are closest to Him: His holy ones, His saints. (In Greek, ἄγιος, means both “saint” and “holy one.”) It is through the saints that God’s immense love for the world becomes most evident: Their lives are witness to this love; their writings speak of it; their miracles prove it.

In our times, a saint has arisen in our own country, one who reposed just two days before Independence Day in 1966. His name is John Maximovich. He is known as St. John of Shanghai and San Francisco, the Wonderworker.

Michael, as he was known from birth, was born to pious parents in pre-revolutionary Russia. One of his ancestors was St. John of Tobolsk, a missionary to Siberia. Michael was a young university student, intent on serving his country through military or civil service, when the Russian revolution took place. Witnessing the horror of the revolution, he forsook secular live and devoted himself to the Church. His family was evacuated to Yugoslavia, where he studied at the theological school of Belgrade University, graduating in 1925. A year later he was tonsured a monk and given the name John, after his saintly ancestor. From this day forward he never slept on a bed. If he slept, it was either sitting in an armchair or kneeling on the ground. He was later ordained a priest and taught at a Serbian monastery for the next eight years.

In 1934, St. John was consecrated the bishop of Shanghai. Soon after arriving in Shanghai, he opened an orphanage, an old-age home, and a new cathedral. He served Liturgy every day, then would visit the sick with the Holy Gifts, often walking barefoot or only in sandals, and gathering children from the street to bring them to the orphanage. The orphanage cared for more than 3,000 children in its 15 years of operation. St. John, who was affectionately known as “Vladyka John,” became a father to the entire orphanage.

When communism arose in China after World War II, the Russian community fled to the Philippines. Thousands of refugees lived in primitive conditions, waiting for Australia and the United States to grant them asylum. St. John travelled to Washington D.C. to ensure that the refugees could immigrate to America. He was then assigned to Western Europe, where he pastored the Orthodox flock for a decade.

In 1962, St. John made his final move when he was assigned to the Western American Diocese, based in San Francisco. He guided the community through a contentious time, as they sought to build a new cathedral. In 1964 the cathedral was completed. Two years later he departed this life on July 2, 1966, while on a pastoral visit to Seattle with the wonder-working Kursk Root Icon of the Theotokos. In October 1993, the remains of St. John were brought forth from the crypt and found to be incorrupt. A year later he was canonized a saint.

St. John was a fervent intercessor in his life, and he has continued to be after his falling asleep. Even within our parish there are miracles which St. John has performed. His incorrupt relics remain in the Cathedral of the Theotokos, Joy of All Who Sorrow in San Francisco. He keeps “correspondence” with the faithful, responding to their prayer requests which are written as letters to him and placed under his reliquary. In our church his icon is along the left side of the nave farthest to the back.

May St. John continue to be a bold intercessor before the Lord on our behalf!

When I was asked to write about my journey to Orthodoxy, it was a perfect moment to reflect back on ... [ END_OF_DOCUMENT_TOKEN_TO_BE_REPLACED ] 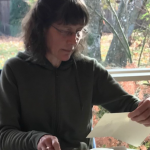 When, as a child of six, my mother was suddenly and unexpectedly taken from our lives as the result ... [ END_OF_DOCUMENT_TOKEN_TO_BE_REPLACED ]

My husband, Chris, and I were both raised in the Protestant Faith: he was raised Baptist and I was ... [ END_OF_DOCUMENT_TOKEN_TO_BE_REPLACED ]