Before becoming Orthodox, I was a Protestant Christian my entire life. I was not raised in a family where we necessarily went to church every Sunday, but I was always a part of the Christian 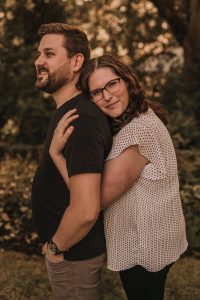 faith. I attended a Methodist church as a kid and went to many different VBS camps growing up. I moved to Oregon City when I was entering 8th grade and eventually made friends who attended an Evangelical church, which I attended throughout high school. After high school, I started attending a non-denominational church (then known as Solid Rock, and now is known as Bridgetown Church). It was always important to me to be a part of a church with a strong sense of community.
If someone told me I would become Orthodox, one day I am not sure I would have believed them, as I did not know what Orthodoxy was until I met my now husband, Greg Sebastian back in October 2019. I remember meeting him and us both talking about our faith. I immediately started asking all of my friends and family if they knew what Orthodoxy was. As I began having feelings for Greg and knew how strong his faith was, I wanted all the more learn about Orthodoxy. My friends and family were very supportive of inquiring about the Orthodox Church. I also spent a lot of time talking with my friend who I learned grew up as an Old-Rite Orthodox, who also spent time at the church I was attending before looking into Orthodoxy.
In February 2020, I flew to San Francisco for a conference. I turned it into a weekend to visit one of my best friends, as I would often visit San Francisco once or twice a year. I was talking to Greg about how I was trying to decide what to do one of the days I had free, as I had already seen most places in San Francisco. Greg suggested visiting Holy Virgin Cathedral. It’s hard to put the experience of my visit in words. But I definitely left with a handful of Orthodox books from the gift shop.
Then March 2020 hit and essentially our world shut down, as some refer to it. However, I think that it was ultimately what led me to officially inquire about Orthodoxy. Since we all went to working from home, I am very much a person who likes to try and keep work and home separate, so thankfully I was able to spend a few workdays at Greg’s apartment, using his kitchen table as my office.
Then Holy Week 2020 began. I will be honest and say that I do not think I would’ve made it to a single service that year if it weren’t for the pandemic. I was working in Oregon City and Greg was attending St. George in Eugene, so the commute was difficult. Because we were working remotely with flexible schedules, I was able to virtually attend almost all of the services. I paid really close attention to all the services and read the service book very closely. After that week I can confidently say I was committed to exploring Orthodoxy more.
Over the next several months I attended more services, read dozens of books on the Orthodox Faith, met with Father Matthew, and attended the ‘Fullness of the Faith’ catechism class. Greg and I got engaged in October 2020, and we both knew we wanted to get married in the Orthodox Church by that point. I was officially baptized on Holy Saturday, May 1, 2021.

It is a great joy to introduce to you Ioan Gheorghiu, who will, by God’s grace, become our Director ... [ END_OF_DOCUMENT_TOKEN_TO_BE_REPLACED ]

We have begun the spiritual journey to Bethlehem, to the cave where our Lord Jesus Christ was born. ... [ END_OF_DOCUMENT_TOKEN_TO_BE_REPLACED ]

What will the community of St. John look like in 25 years? It’s hard to imagine—just as it would ... [ END_OF_DOCUMENT_TOKEN_TO_BE_REPLACED ]