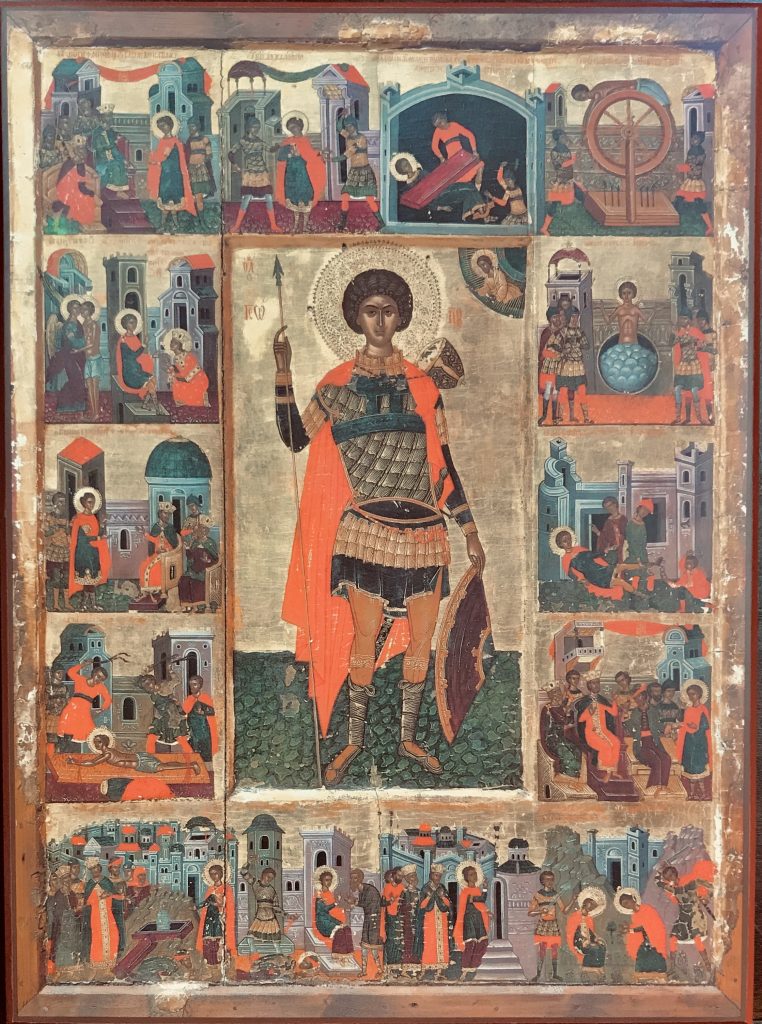 As the one renowned for setting captives free and for defending those in poverty, the physician of the sick and the champion of emperors, great and victorious Martyr George, intercede with Christ our God, beseeching Him to save our souls.
~ Apolytikion for St. George

It is fitting to use Arabic today for the Paschal greeting. Today is the feast day of St. George the Great Martyr and Trophy Bearer and he is buried in Lydda, Palestine, where Orthodox Christian Arabs live to this day (though sadly very few). Lydda was the homeland of St. George’s mother, and it is where he was raised after his father was martyred for Christ in Cappadocia. While St. George never spoke Arabic—because he lived before Islam and the expansion of the language—the Arabic-speaking descendants of his kinspeople in Palestine (and in Lebanon and Syria) greatly revere their “local” saint. For this reason, numerous Antiochian Orthodox churches are named after St. George.

In Greece as well, St. George is a highly revered saint. His name, Yiorgos, is Greek and it means farmer: γι (Yi) means earth and ἐργον (ergon) means work, so literally “one who works the earth.” Thus the hymns to St. George give reference to his name:

“True to your name was the manner of your life, O George the Victorious. For taking up the cross of Christ on your shoulders, you tilled the earth parched by diabolical delusion. As you uprooted the thorny religion of the idols, you planted the vine of the Orthodox faith everywhere. Therefore you pour out healings for the faithful throughout the civilized world; and you have shown yourself to be a righteous farmer of the Trinity. We beseech you: intercede for the peace of the world and the salvation of our souls.” (Hymn from Vespers for St. George)

St. George was a member of Emperor Diocletian’s imperial guard, an honor he received due to his valor in war. However he proved to be far more brave and valiant in his witness to Christ. “When you endured many methods of torture, you, O Martyr, were refined like gold in fire seven times over and purified.” (Hymn from Vespers for St. George)

He is called a “great martyr” because so many people were converted by witnessing his martyrdom. Through his patient endurance of numerous tortures, 630 people who were converted to Christ, all of whom then became martyrs. Even the Roman emperor’s wife, St. Alexandra of Rome, was converted and then martyred. The icon depicts scenes from St. George’s martyrdom.

Through the intercessions of the Great Martyr George, Christ our God have mercy upon us and save us!

It is a great joy to introduce to you Ioan Gheorghiu, who will, by God’s grace, become our Director ... [ END_OF_DOCUMENT_TOKEN_TO_BE_REPLACED ]

We have begun the spiritual journey to Bethlehem, to the cave where our Lord Jesus Christ was born. ... [ END_OF_DOCUMENT_TOKEN_TO_BE_REPLACED ]

What will the community of St. John look like in 25 years? It’s hard to imagine—just as it would ... [ END_OF_DOCUMENT_TOKEN_TO_BE_REPLACED ]